My son is in his second year in a Montessori preschool and this year he's really enjoyed the hand sewing projects in class. He started on a plastic canvas sewing project, spiraling in from the outside border. Then one of the teachers drew him a rat to stitch on burlap. And now he's working on sewing a teddy bear which I suspect is intended to become a pillow (no picture -- think two teddy bear shaped cutouts of woven fabric, sewing them together with regular needle and thread around the edge).

Seeing how excited he's been about sewing I invited him to help me machine piece some seams on the drawstring bag I was making for my mother-in-law. He really enjoyed that. I asked him if he'd like to learn how to make a quilt and he was THRILLED!

Step One: He raided my stash of fabric and selected a variety of animal prints.

He's even decided on a friend who he intends to give it to. (Yes, it's kind of killing me that I don't get to keep his first quilt!) But I appreciate how excited he is to give this gift. We'll see how he's feeling once it's done.

In the interest of keeping it simple, we'll be using 6" finished squares. I'll be making a small quilt alongside him so that I can show him the process with my blocks in an effort to let him do as much of his own sewing as possible.

Step Two was to cut out all the squares. I did that myself, cause I'm just not so excited about handing a rotary cutter to a 4-year-old. :-) He hung out with me while I cut out the squares as I was not granted permission to do that step without him. That also meant that my 2 1/2-year-old daughter hung out with us. She enjoyed being "in charge" of the scraps of leftover fabric. 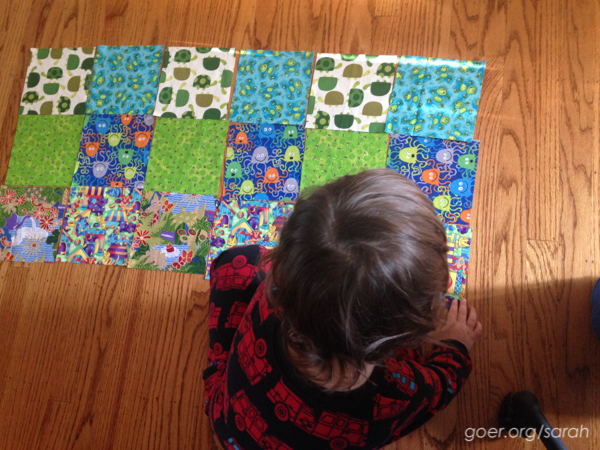 Step Three: He meticulously laid out his 36 blocks in his own pattern. Not knowing in advance that there was going to be a pattern requiring multiples of 3 of the same print we had to pitch a few blocks and managed to find one more suitable fabric that I could get three squares out of. It happened to be my leftover fabric from making my daughter's pants. She was concerned that I was cutting up her pants. She kept telling me that she didn't want me to cut them, she wanted to wear them. Here's his final layout.

Now, since her brother got to "make a pattern" with his quilt squares, she naturally decided that she should get to make a pattern as well. So I let her choose the layout for my 35 blocks (I didn't manage to end up with 36 due to a flaw in one of my fabrics). She and I have a different idea of what "pattern" is, but I've decided to go with it. No idea what I'll be doing with this quilt. She won't be doing the sewing, so I think her contribution to our project ends here.

Have you taught a young child to quilt? Any tips?

See how our project is going in Part 2 of this series.

Teaching My Son to Quilt: Part 2