It's once again time for Project QUILTING. Kim at Persimon Dreams and Trish at Quilt Chicken host this series of one week quilt challenges running now through March. I participated for the first time last year for season 8. Each week there is a theme and exactly one week to formulate a plan and execute it to completion. This week's theme was Hometown Proud. There is a prize drawing for participants, and a Viewer's Choice vote, so be sure to visit the link up and vote for your favorites. (VOTING IS OPEN. Mine is #73.) If you haven't participated, consider joining us for round two which begins on January 21. 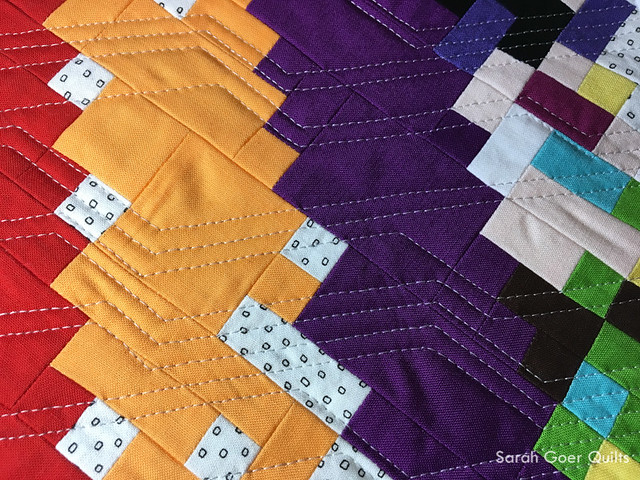 I have lived my entire life in San Jose, California (with the four year exception of being in college in San Diego), so unlike people who had to consider which town they wanted to identify with for their challenge, there was only one choice for me: San Jose. I thought a little about what San Jose means to me, or what comes to mind. San Jose is a city with a population of over 1 million people. Santa Clara County has nearly 2 million people, and the greater Bay Area has a population of over 7 million people in nine counties and 101 cities. I live in the heart of Silicon Valley. There are a wealth of options to represent my hometown. I considered a few options, thinking about memories from my childhood. Here are a few I considered: Happy Hollow, Sharks hockey, Wichester Mystery House, San Jose Giants, Christmas in the Park, The Tech Museum, San Jose Museum of Quilts and Textiles, the 'Quake of '89, History Park, Hotel De Anza, San Jose libraries. In the end, I settled on the first item on my list: the orchards. 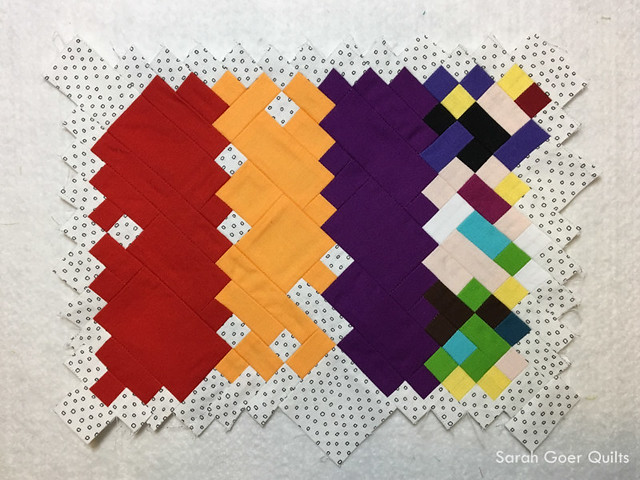 Back before Silicon Valley was Silicon Valley, the valley was full of trees. Long before I was here, Santa Clara County had 8 million fruit trees. My parents built their house in the 70's along the east foothills surrounded by orchards. The vast majority of these orchards are gone. Heritage Orchard at San Jose’s Guadalupe River Park is 3.3 acres, containing over 200 fruit trees, of the varieties that were grown in the Valley over the last century. This map (PDF) of the Heritage Orchard was the basis for the design of my quilt. Each tree is represented by a 1/2" x 1/2" square. As you can see on the map, the first three sections of trees are cherries, apricots, and prunes. The last section of the orchard has a wide variety of fruit and nut trees. I chose a low volume black on white for the area around the trees and bound in the same fabric. 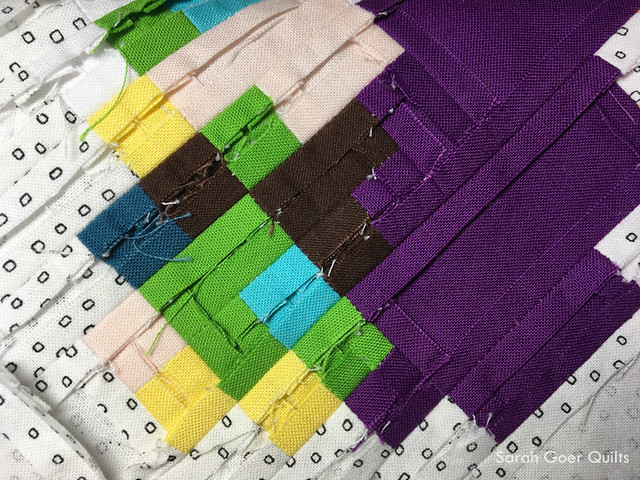 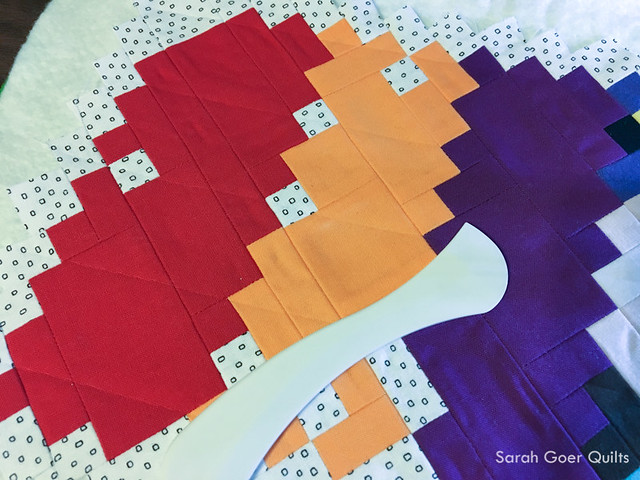 The quilt finished at approximately 7" x 10" and has over 125 pieces. I shared a bit about my project with guild mates without telling my inspiration and a guess was made that all my little bits of fabric were to represent computer chips. From that conversation I was inspired by Michelle and Mary to use the design of a circuit board for my quilting. I used my hera marker to mark some horizontal lines as a guide for my quilting. It is quilted in Aurifil Dove (#2600) 50 wt. 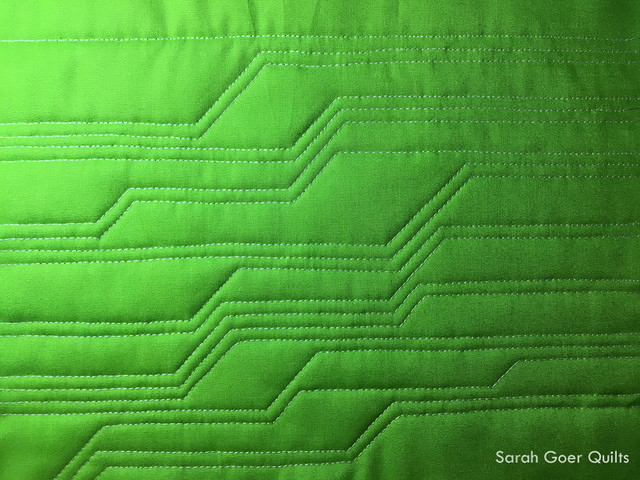 Also with circuit boards in mind, I chose a bright green solid for the backing. I thought these details were a great nod to the current Valley. I've named it Silicon Valley, Then and Now. 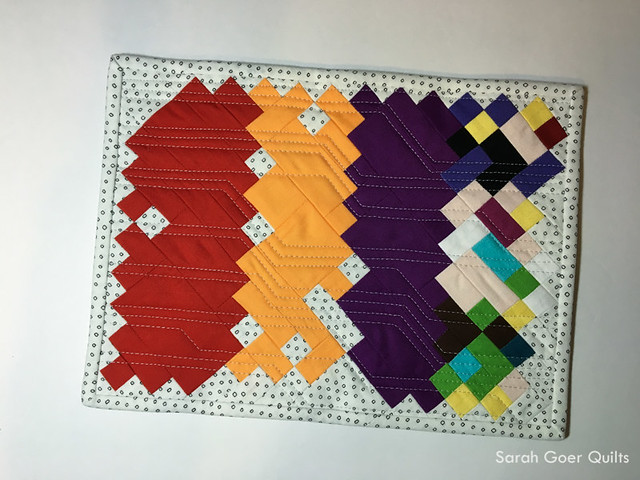 Thanks for visiting! I'm linking up to Project QUILTING 9.1 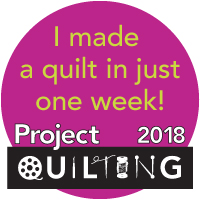 I was so excited when my friend Bernie asked me to create a Blogger Bundle from her shop. As a quilt blogger there's been a tiny voice in the back of my head whenever I've seen other blogger bundles that it would be so much fun to put one together.

I set out to shop for my fabrics in Bernie's lovely fabric shop, Needle & Foot, Fine Fabrics. There are a lot of great prints to choose from like these adorable frogs and this fun rainbow confetti. And my daughter would love these sassy cats. In the end I decided on a more versatile palette and stuck true to my fabric preferences with a bundle of blenders! 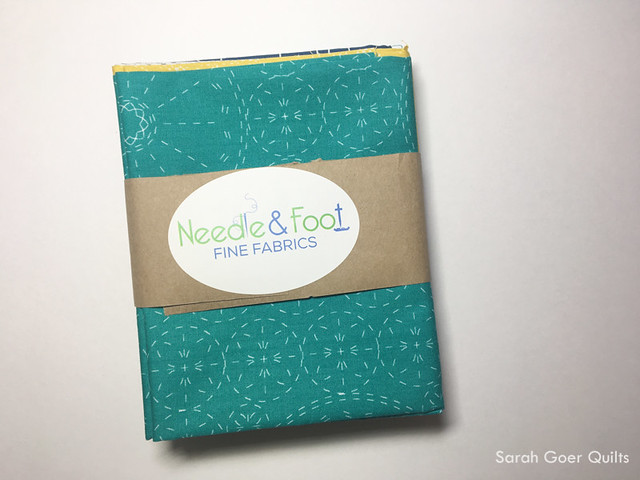 I changed up one of my favorite palettes to include a beautiful, sunny yellow. 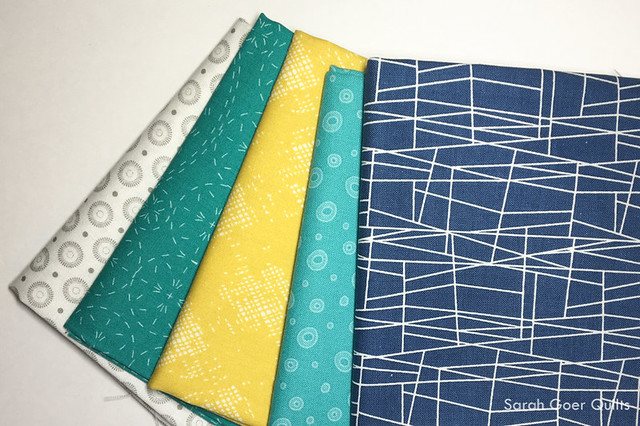 I love the geometric lines of the navy combined with the circular patterns on the other fabrics. Left to right, they are Dots in Grey, Sashiko Florette in Teal, Terra Firma in Sunlit, Bubble Dot in Teal/Aqua, and Atomic Web in Blue. 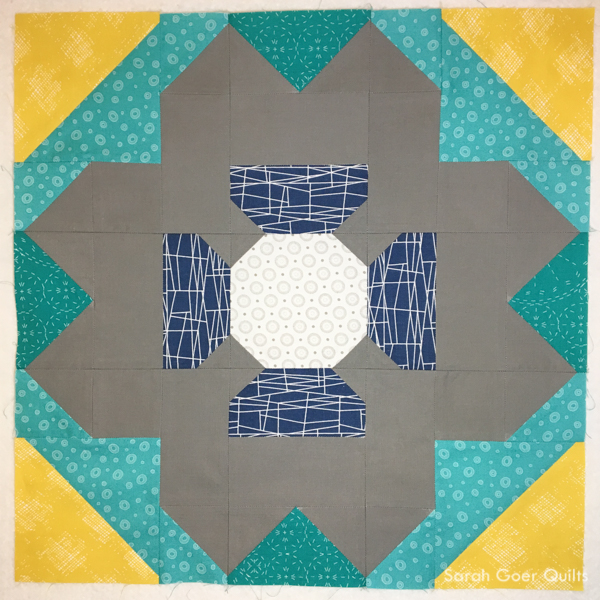 I paired the bundle with Kona Pewter and designed this block. This is the first of four 16" blocks to turn my bundle into a baby quilt. Stay tuned for more! 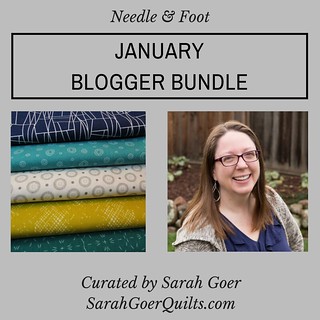 GIVEAWAY HAS ENDED. Bernie has provided me with a bundle just for one of you! For your chance to win this fat quarter bundle of five fabrics, please leave any comment below. Newsletter subscribers can leave a second comment for a bonus entry. (Not a subscriber yet? Subscribe in the purple bar at the top of my blog, click to confirm your subscription in the email that comes to you, and leave a comment on this post telling me you're a new subscriber.) Entry deadline is 11:59pm EST on Friday, January 12 and is open internationally. I will email the randomly selected winner and they will have 48 hours to reply with their shipping address or I will select a new winner. Good luck! EDIT: Suzette Harris is our winner! :-)

Curated Quilts is a new quarterly quilt journal, created by Amy Ellis and Christine Ricks, which features beautiful images of modern quilts and articles about artists, their work, and the quilting community. Each issue has a call for mini quilt submissions with a theme and color palette. The theme for issue three is minimal and the palette appealed to me. We were asked to use only a subset of: light grey, leaf green, grey, orchid pink, blue grey, black. 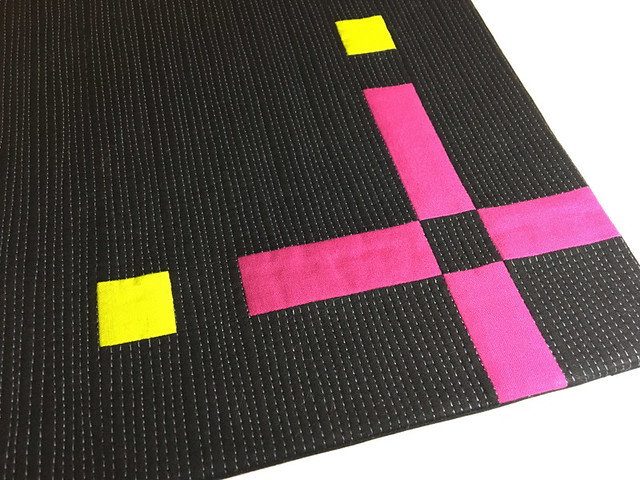 I started by pulling all the solids from my stash that fit these requirements. I didn't have any blue grey and ended up editing out the greys. My mini has Kona Cerise, Peapod, and Black. I brought in the grey with my quilting (Aurifil #2605). I also pieced the entire quilt with black (Aurifil #2692) thread since every seam had black fabric. My mini finished at approximately 13.5" square. 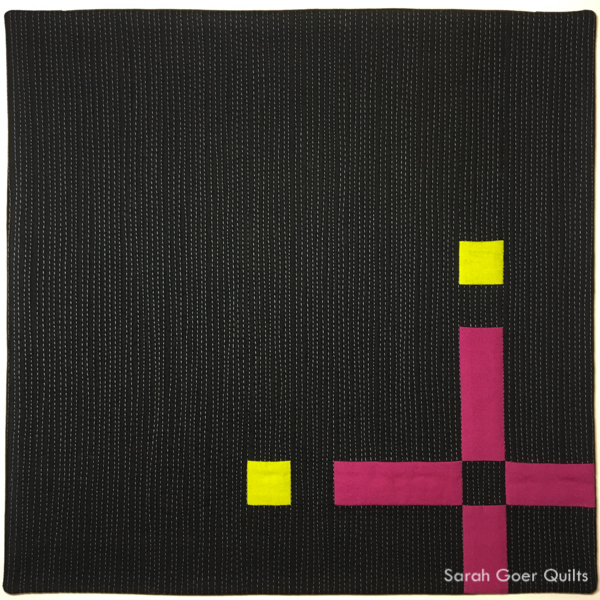 One of my goals for the year is to design with letters of the alphabet. I thought this challenge was the perfect opportunity to choose a letter and use it in my minimal design. I quickly landed on the letter i. Often I piece a quilt top and then I consider quilting option. For this project I considered my plan for quilting from the beginning, choosing to quilt the entire black background with 1/8" matchstick quilting so the vibrant letter i's stand out. This might be the first time I've been set on the quilting motif before taking a single stitch. 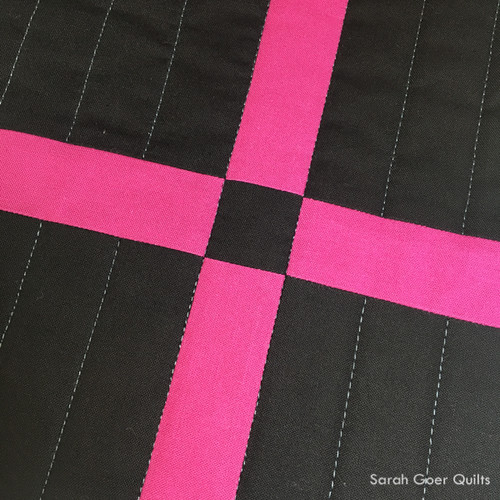 I began my quilting by stitching in the ditch on my vertical seams, then used a guide to quilt vertical lines every one inch. 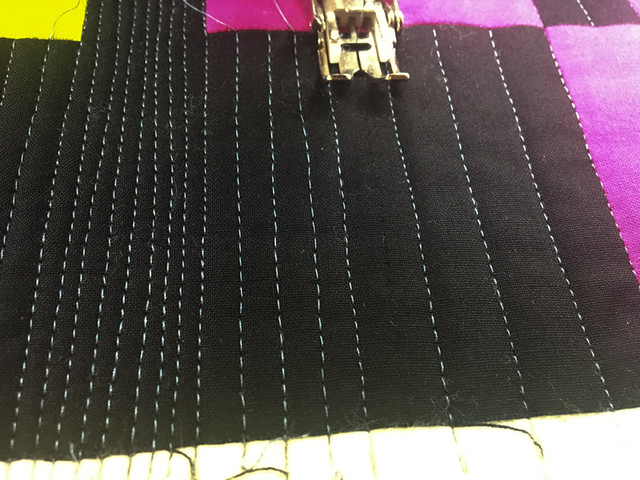 I continued stitching between each line of quilting. This photo shows how I eyeballed the center of each section... those are 1/2 inch sections on the right, 1/4 inch in the middle, and 1/8 inch on the left. 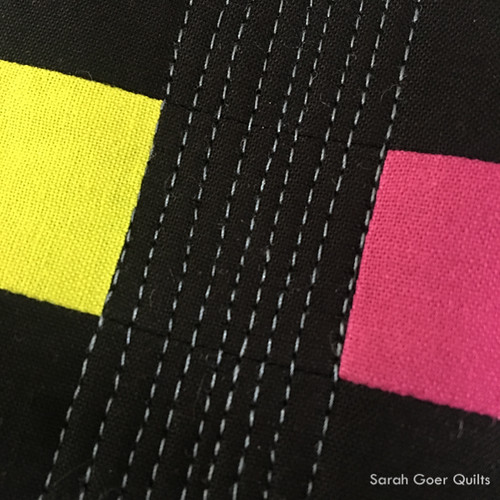 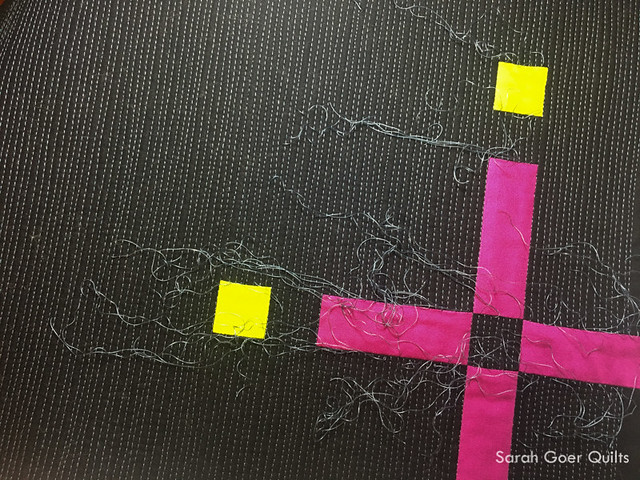 The tricky part was starting and stopping around the pink and green pieces. Tons of threads to bury! In the end, all that work was totally worth it! 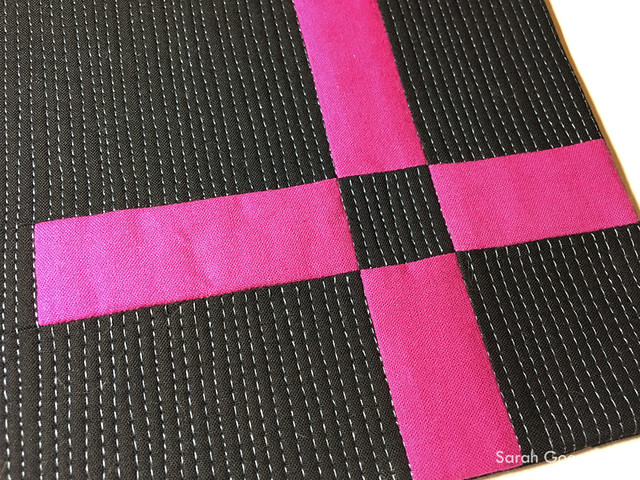 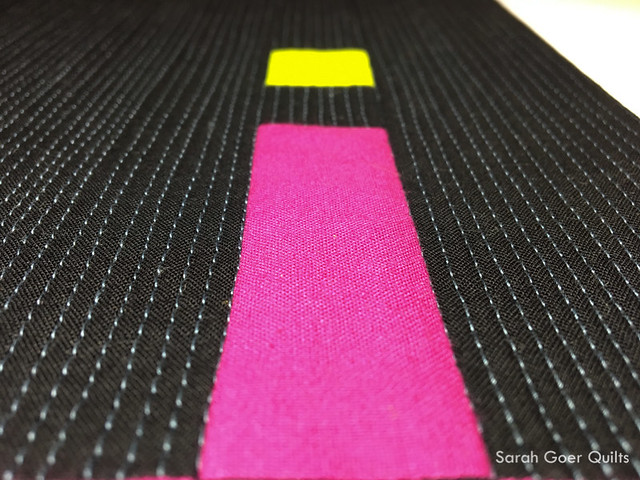 I chose a faced binding so the quilting and the pink pieces would go right to the edge. I use this technique for my faced binding, though I press the folded edge before attaching it to the quilt. ;-)

Thanks for visiting! It's been so fun to see what other have created for this challenge. Check them all out on the CQ call for entries. I've also linked up to Needle and Thread Thursday.

Show Me Something Appliqué (linkup by September 30!)