Or... Not So Mellow Yellow. 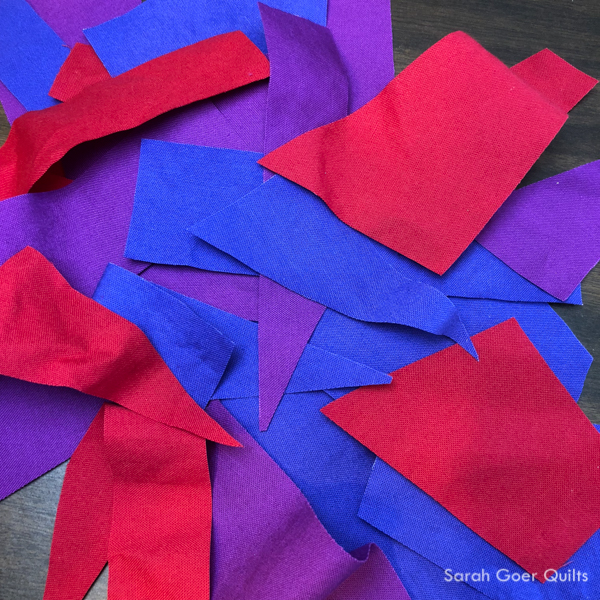 I knew this week's Project QUILTING challenge would be extra hard since I was leaving for QuiltCon on Wednesday morning. That left less than 70 hours for the challenge, including sleeping and packing. Step one, make it small. Maybe really small. 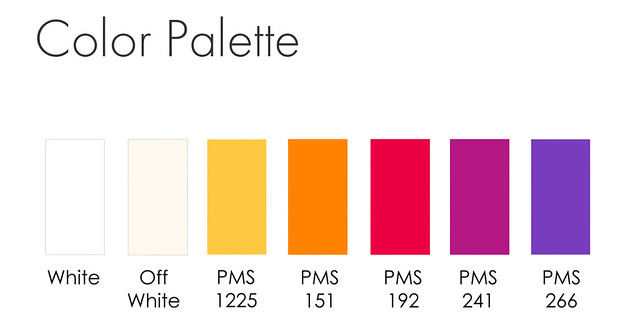 I was pleased for it to be a color challenge, as I knew I could make it work in the short period of time. The first palette I considered was this year's QuiltCon Charity palette. First, it included a bright, cheerful yellow. Second, I've loved the palette since it was first announced. And third, since I'm an Individual Member of the MQG I wasn't participating in making a charity quilt with those colors. I had already purchased the solids a while back, knowing I would someday make a quilt in this palette. My fabrics were Kona Corn Yellow, School Bus, Red, Geranium, and Bright Peri. (Why use a neutral when you can use more color instead?)

I chose a simple, single star block. "Work small," as my friend Mel reminds me for short challenges. So, I decided on an 8-inch sawtooth star block. I wanted to use all the colors, which led to the decision to piece the background sections by building a slab from the non-yellow colors. I edited out the School Bus orange in favor of the three darkest values: Red, Geranium, and Bright Peri. 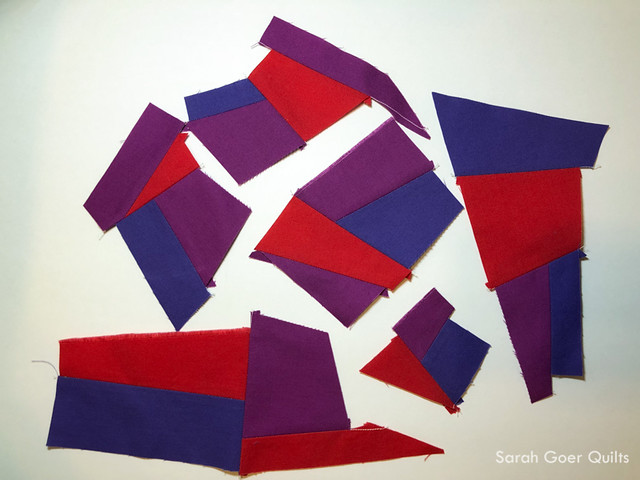 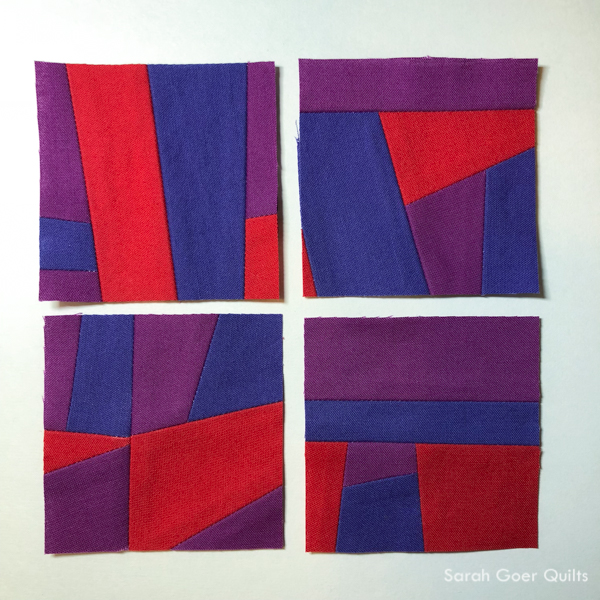 Here's an accidental alternative setting. I dig this one too, but it wasn't what I initially had in mind and I wanted to stick with plan A. 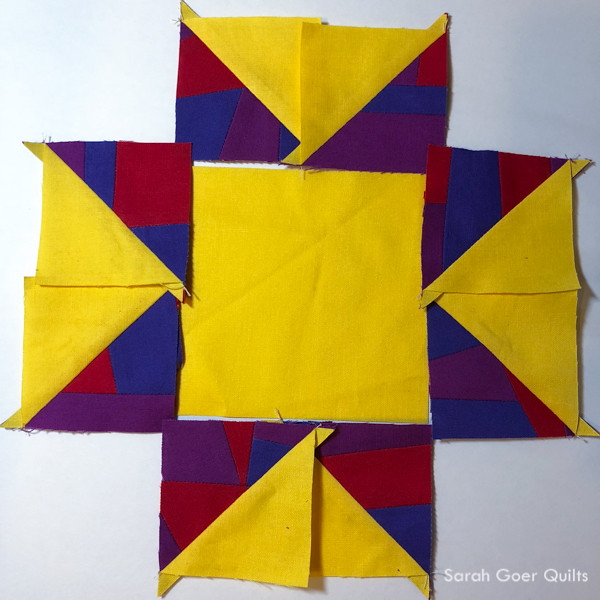 Once the block was pieced, I intended to add a border of the scrappy background and a yellow binding, but I would have had to build a new slab and I was crunched for time. I didn't like the idea of putting a solid yellow binding on it without the borders since the star points would touch the binding. It was clear to me that the right answer was a scrappy binding that would blend with the background. 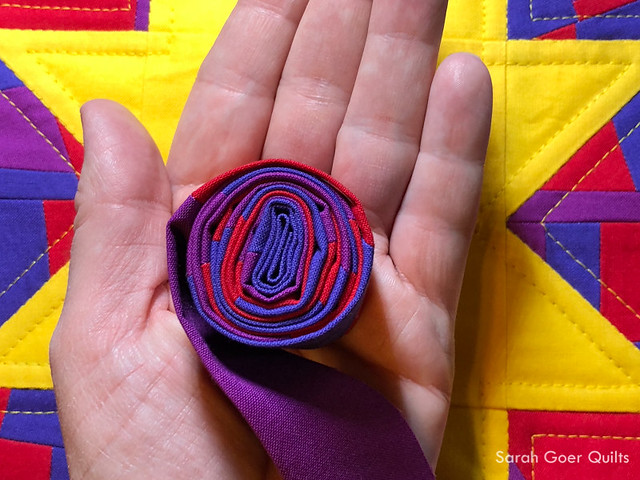 It took a little planning to be sure that my corners wouldn't have seams, and that the binding fabrics weren't matching too much with the background fabrics. Though honestly, it probably would have been faster to build more slab for borders and use a single piece of fabric for binding. That said, I'm thrilled with the results. 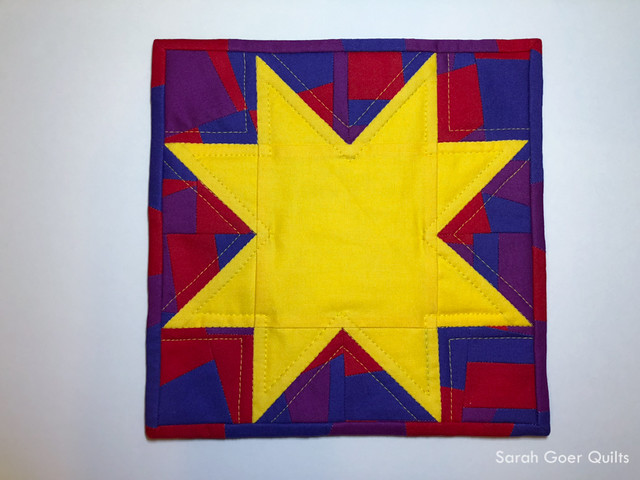 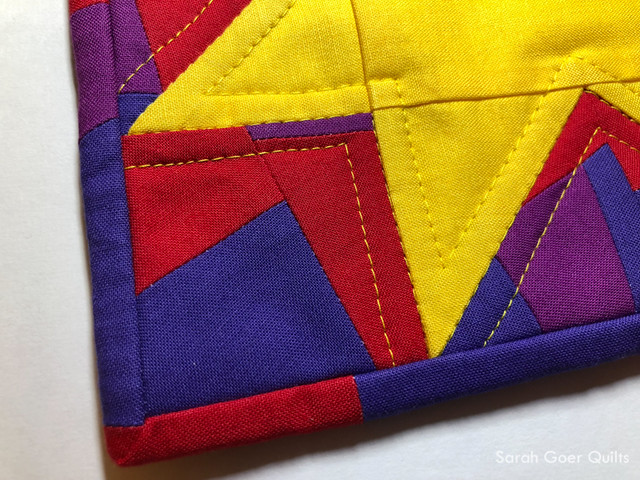 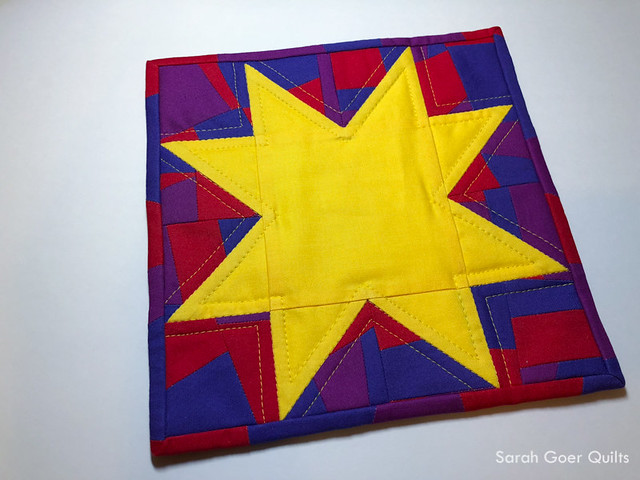 I'm linking up to Project QUILTING 9.4. Be sure to check out all the submissions and vote for your favorites. (Mine is #70.)

Project QUILTING 11.4: Birds in the Air