Merry Christmas to those of you who are celebrating! Yesterday I had three quilt finishes! Nothing like a deadline to buckle down and get stuff done. ;-) 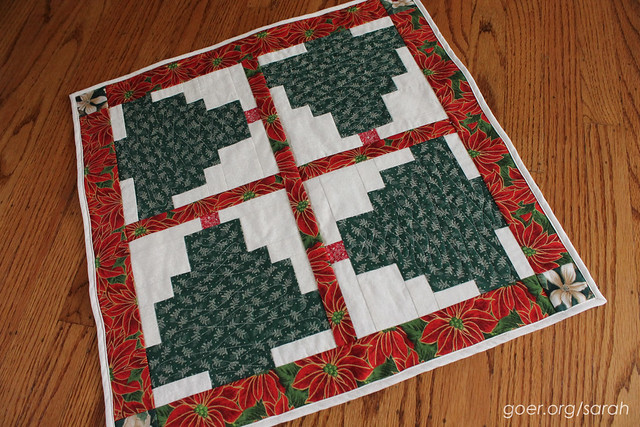 Here's the Christmas Tree mini that I made for my mom as a table topper. I'm happy to have gotten it done in time to deliver at the Christmas Eve dinner party last night. This one was also my December ALYoF goal. 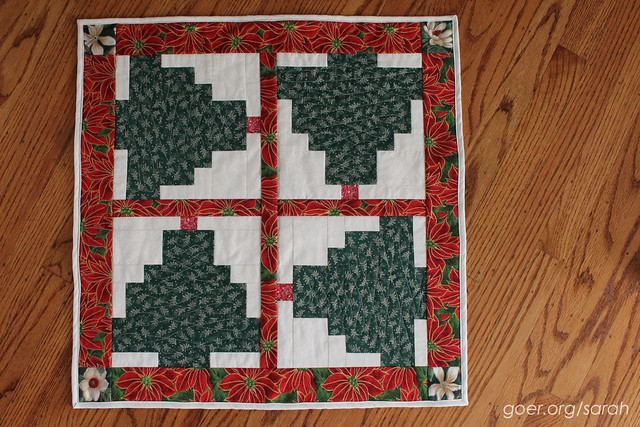 These four orphan blocks came from a guild sale maybe ten years ago. They spent a long time deep in my stash and resurfaced when I got organized over a year ago. The project has been a low priority WIP on the list for the past five quarters. Since it's a holiday project I was motivated to get it done now, instead of letting it sit around for another year. 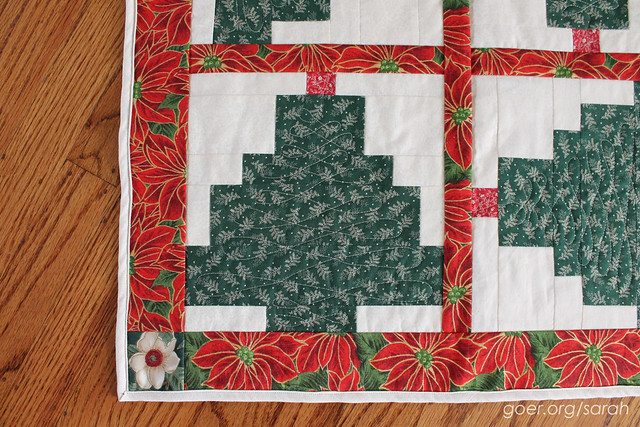 At the SCVQA 40th anniversary party I won a few fat quarters of Christmas fabric. I used the poinsettias here for the sashing and border, but didn't have quite enough, so I fussy cut the flowers on the green fabric for the corners. The backing and binding were both stash fabrics. It has simple quilting, just on the trees. Overall the table topper measures about 22" x 22".

I'm linking up to ALYoF December Finishes Party and Adrienne's 2015 Q4 Finish Along post. See all my Q4 goals here. Thanks for visiting!

I just can't resist a great swap theme. The early mosaics for the Home Sweet Home Mini Quilt Swap convinced me to dive it. This swap was a little different in that we were paired with partners to make for each other. That makes this the first time I've not shown my finished mini online in advance of mailing it. Since Brittany knew it was for her. My September goal post showed my first seam, the curved curtain in the window.

Brittany told me "I like retro houses and campers, but anything bright is good with me!" I couldn't decide on an existing camper pattern, so I created my own. It's made by piecing the camper (except for the hitch and wheel), then cutting out the outline of the camper to applique to the background. I used turned-edge machine applique for the wheel and the camper. The hitch is simply fused and stitched in place. I had a great time designing it and making it... and actually made two so I could have one for myself. My camper is done, but the quilt isn't quite finished yet. Here's the one I sent to Brittany. It measures 20" x 16". 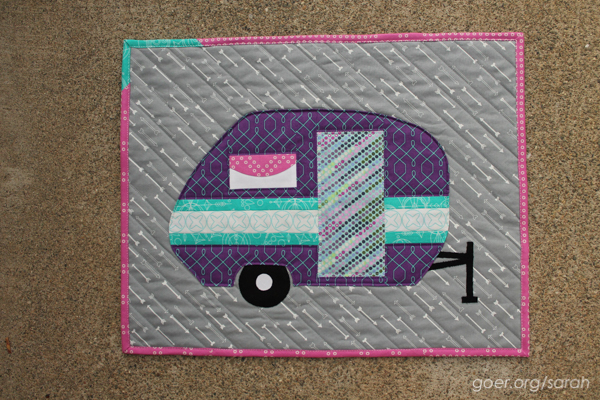 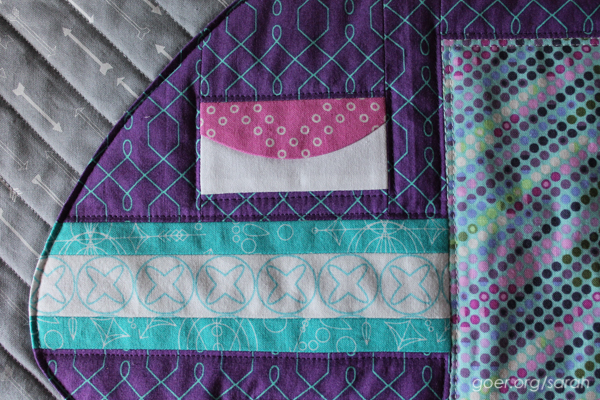 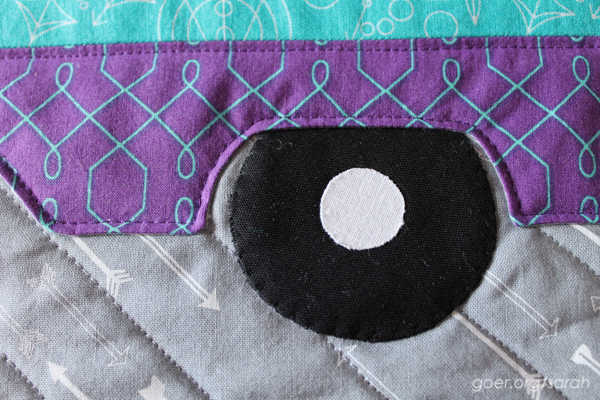 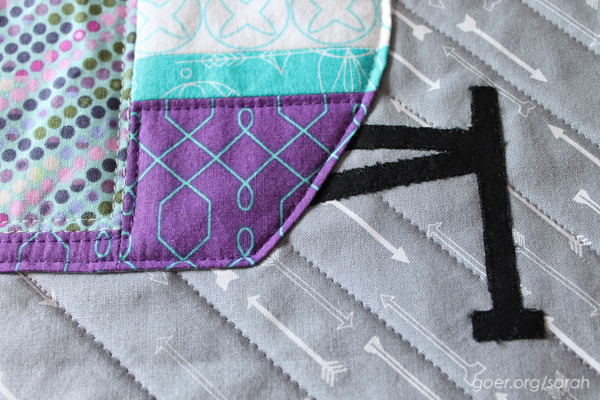 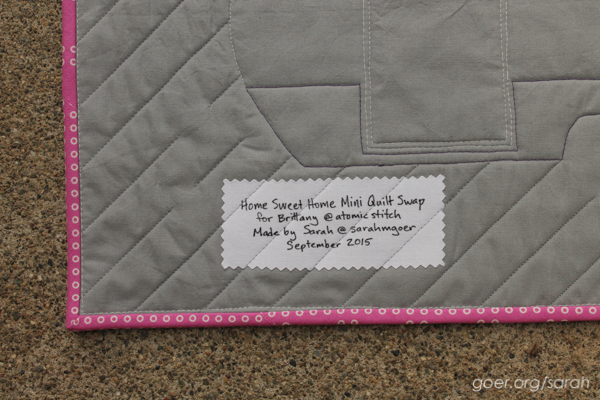 I also made her this tiny little quilt. I took inspiration from Completely Cauchy's itty bitty piecing and whipped this up. It finished at 5" x 5". I think it has 83 pieces. 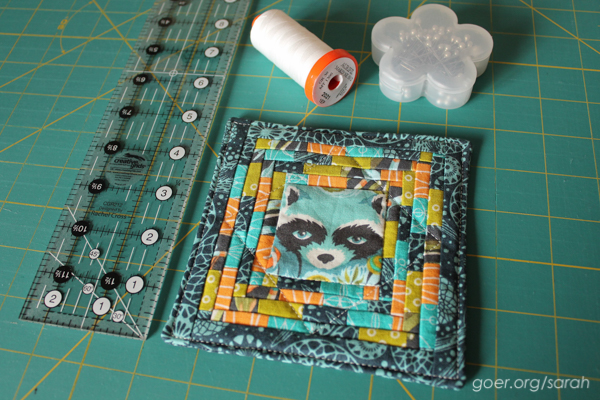 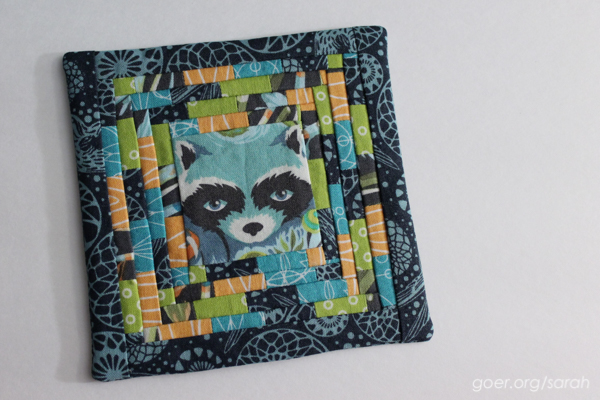 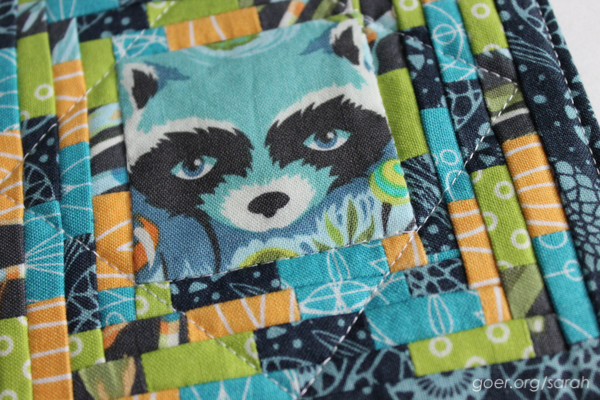 I'm linked up to ALYoF September Finishes, TGIFF and Finish It Up Friday.

My next mini swap in the queue is the Home Sweet Home Mini Quilt Swap. The shipping deadline is Wednesday. Eek. So this is not only a September goal, it's a 72-hour goal. Luckily, I've got some time in my schedule to sew sew sew today and tomorrow.

This is the first swap I've been in that we've been assigned partners and we're making for each other. I generally am so excited about what I'm making that I show it off while it's in progress, since nobody knows who will be receiving it. This time, I'm making for Brittany and she knows it. (And she's making for me.) So, I'm not showing much along the way. In fact, this glimpse below is all anyone will see before Brittany receives her package.

I designed my mini and included one pieced curve (gasp!). Since I'd never done this, job one was to figure that out. I cut pieces from my hand-drawn templates and then pinned the heck out of it. I think it was a mistake to piece it with the outer curve on the bottom. It was a puckered mess when I finished. Oops. 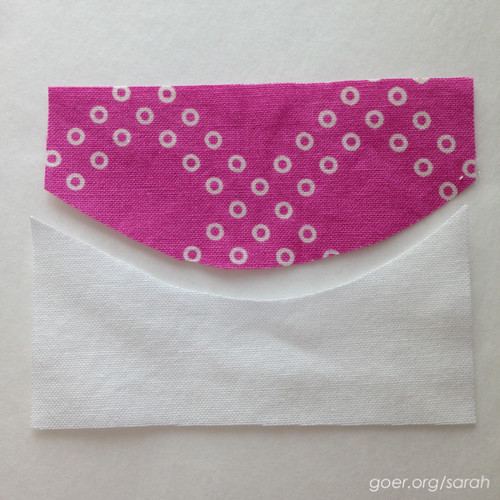 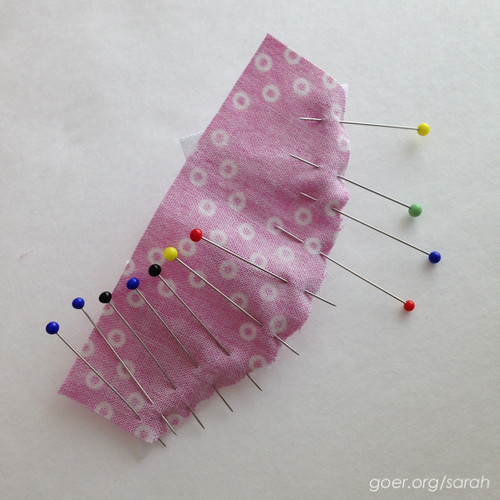 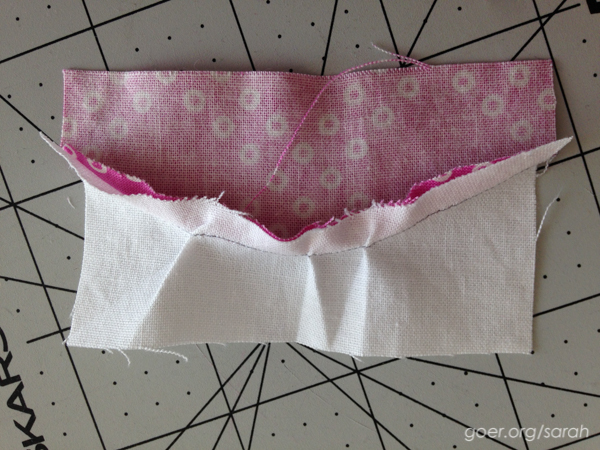 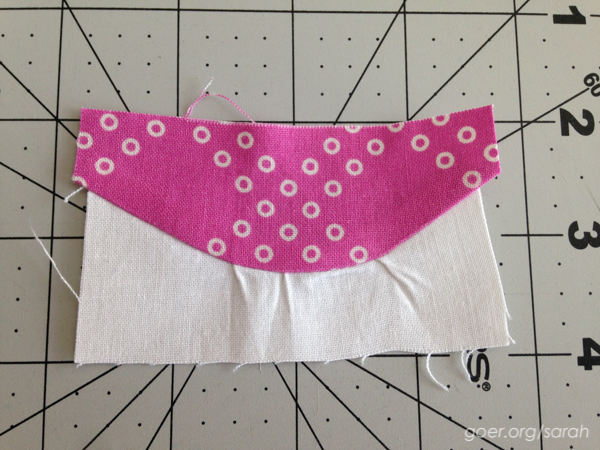 I shared on Instagram and Amanda and Jessica both recommended Leanne's curve sewing tutorial. Oh my gosh! Game changer. I never would have attempted to pieces a curve without pins, but her short video illustrated it beautifully. Here's the result of my second attempt. No pins were used in the making of this one. 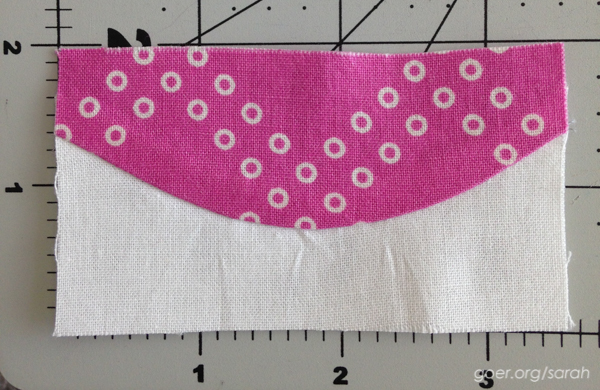 Overall I'm happy with it, but it is just a smidge shy of the intended size. I made one more (oh, cause I've decided to make this mini twice, one for Brittany and one for me) and cut my pieces larger than necessary so I could trim down to 2" by 3.5". (Unfortunately I didn't pay attention to the position of the shape of the fabric as much as to the pattern on it when trimming, so it's not quite symmetrical, but I think it'll be fine.) Here's my third curve. 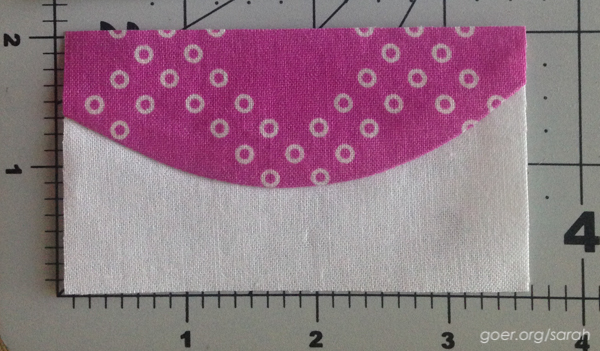 Now on to all my straight seems. Stay tuned for my big finish after it reaches its destination. And after that I'll be wanting to sew all the curves! This little piece and Leanne's tutorial opened up a whole new world of possibilities. Once again I'm glad I've used a mini swap to push myself beyond my normal quilting skills.

Do you participate in quilt (or other craft) swaps? What's your favorite part?