Four years ago this week, I took an improv piecing workshop with Karen Foster of Capitola Quilter. She taught Improv Abstraction, using two methods of improv curves, for the workshop with Bay Area Modern. In my #99DaysofWIPs this summer I focused on projects that had been started in quilt workshops such as this one.

I used the remaining solids in these two colors, Kona Pewter and Nautical, to fill in and add to the blocks I'd created in the workshop.

Me daughter assisted me for a quick photo shoot at the park. I chose the orientation of the first three blocks I pieced (in the lower right center), because they reminded me of an AT-AT from Star Wars.

Have you tried smooth curves with a walking foot?

There's a sentiment about how a first child's experience is different than a second child's. (We could talk about how my 8 year old doesn't have a baby book yet.) Apparently the same goes for niece and nephew. Within a couple months of my nephew's birth, he had a baby quilt. However, my niece just received her "baby" quilt for her 2nd birthday.

I started out with a different plan for her. My nephew's quilt had been inspired by the mural in his room and I wanted to do the same for her. But her African safari wall left me feeling like I "should" do appliqué... and I don't particularly enjoy the process of appliqué. Eventually I pivoted to focusing on the main color of her room, purple, a favorite of mine. I have a lot of purple scraps and I have been building purple scrappy slabs to piece for Jillian's quilt for over two years!

In recent weeks (months?) the quilt top has been my backdrop while I'm on zoom. I love reminiscing about the previous purple projects these scraps have come from. (There's a section in the upper right that's from my Ultra Violet All About Angles quilt.)

I'm really deadline driven. As Gretchen Rubin says, "things that can be done any time are often done at no time." And that really resonates with me for quilts that don't have a deadline. A challenge or quilt show submission deadline is really motivating for me. Quilt alongs and 100 day projects help, too. But "I'm making this for someone" doesn't usually have a deadline. As we approached her 2nd birthday, I decided this needed to be my hard deadline. I could hardly still call this a "baby" quilt, but at least it is sizable enough to be a good cuddle quilt for years to come.

I opted for simple walking foot quilting in organic vertical and horizontal lines. I didn't concern myself with perfection or equal spacing.

Then I added a little free motion elephant as a nod to her room. (Shh. I also have an elephant quilt in progress for her.)

My binding is more scrappy fabric. I usually opt for a bias binding, but this one was straight grain pieces, since I wanted to use scraps. I attached the binding by machine.

One of my favorite features of the quilt is the color blocked backing. I chose these fabrics to emulate the mural on Jillian's wall.

I packaged it up and mailed it in early November. We connected on FaceTime so I could see her open her gift. She was delighted.

After her initial appreciation, she just had to run into her bedroom and spread it out on the floor. I'm glad she's enjoying all the details.

Creating a Scrappy Slab is a workshop I currently offer (virtually) to guilds.

The products featured in this post were given to me by Island Batik, Hobbs, and Aurifil. 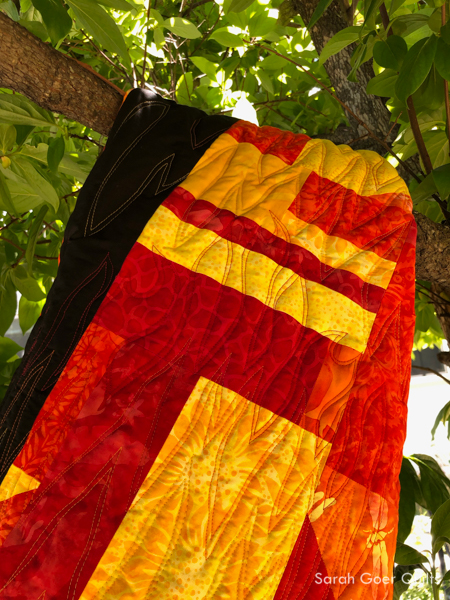 This month's Island Batik challenge is Make It Modern with Hobbs. Last month for the AccuQuilt challenge I used my cool color scraps with a neutral background. This month, I decided to use my warm colored scraps, and initially intended to use a tan neutral background. I toyed with the idea of using the same layout and the AccuQuilt again, but eventually decided that I would piece a scrappy slab. I didn’t have a final layout in mind and just started sewing. 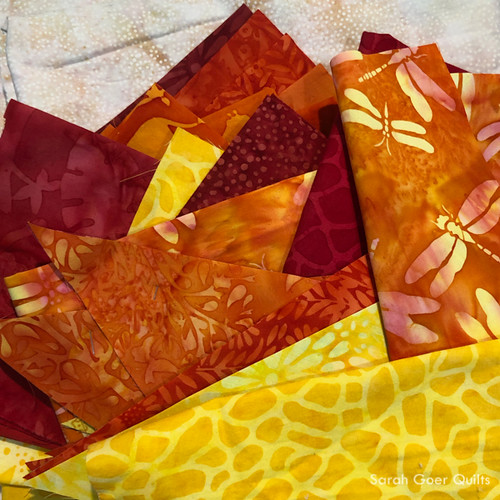 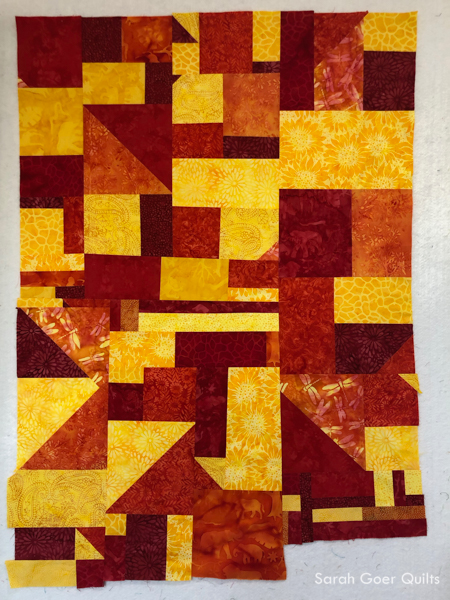 When I finished piecing almost all of my scraps I had a slab that measured approximately 32“ x 42“. Since I was shooting for a 40“ x 40“ quilt I had plenty to work with. Along the way I decided to swap out my tan neutral background, in favor of a solid black batik instead. I really love how the variety of warm colors pop against the black. I had realized that the light tones of the yellows were going to blend into the tan background more than I wanted them to. 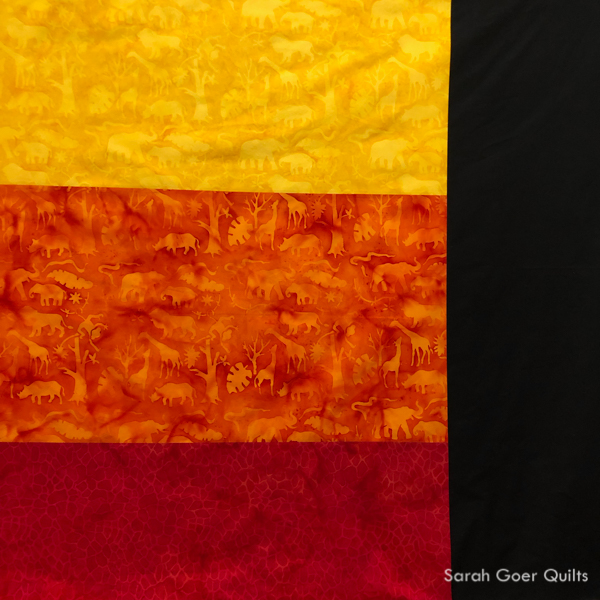 My quilt back is color blocked, pieced from remnants of the Petting Zoo fabric collection that I used in a previous project, with a little more solid black. 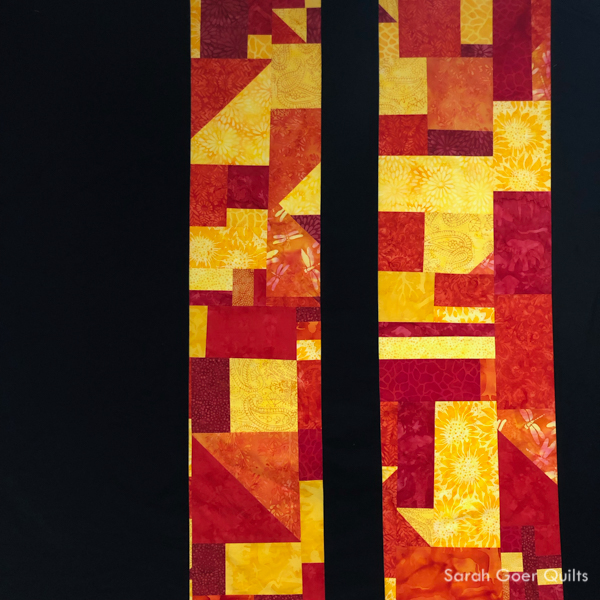 And for my quilt top I opted for a simple overall layout with two wide vertical strips of my scrappy slab, and filled in the background with solid black. 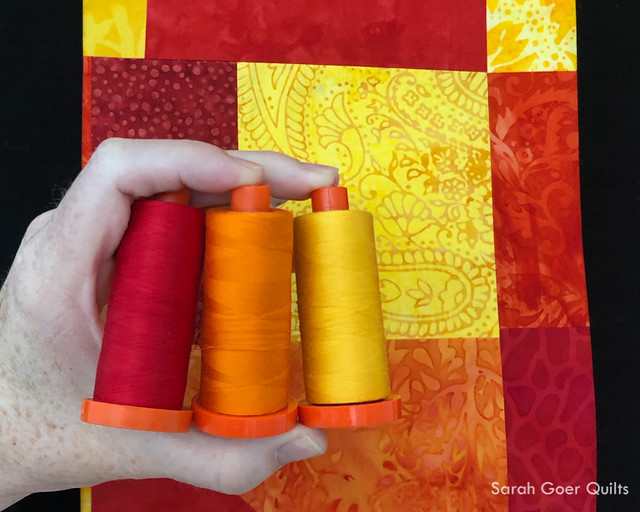 The fiery palette was just asking for flame quilting. I chose three colors of Aurifil 50wt: Red (#2250), Burnt Orange (#1133), and Yellow (#2135). I searched for "line art of fire" on Google to get an idea for the shapes. Then I went for it. I started with the lowest row of red quilting, traveling in an uphill and then downhill direction across the quilt, then I echoed that line in the same color thread. I repeated paired lines of stitching across the quilt in each color. Last time I used Hobbs Tuscany 100% Wool I liked the puffy result of the higher loft, but felt that I hadn’t done the batting justice since my quilting had the same density across the whole project. This time I really wanted to have flatter areas and puffier areas. I switched gears from what was originally in my mind, but by doing a double row of stitching for each pass I created more texture than I would have had with single lines of stitching. 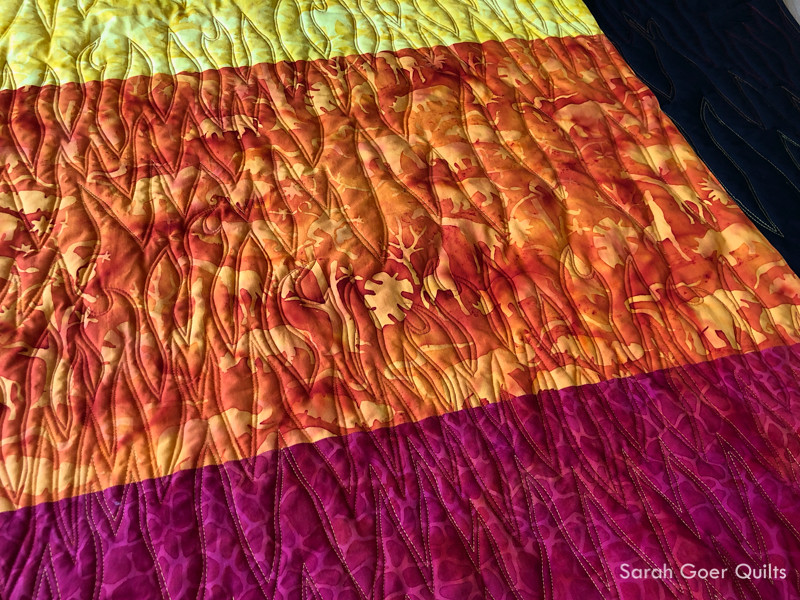 The back of the quilt really shows the texture so well. 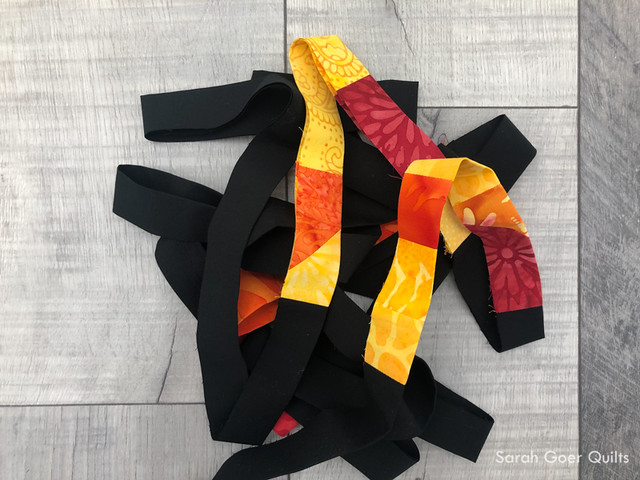 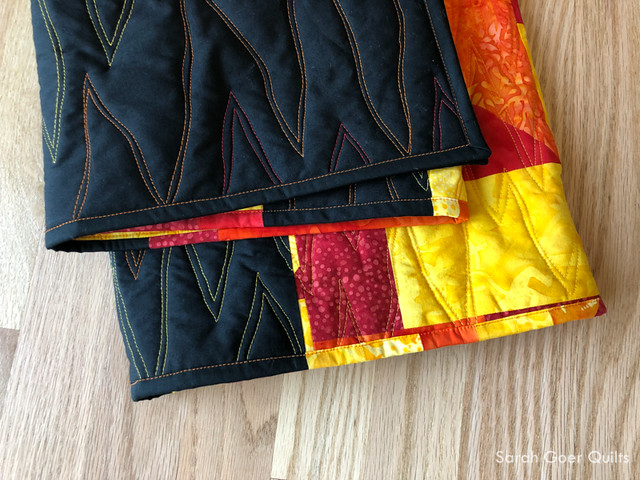 Once the top was quilted and trimmed I started to think about binding. The easy option would have been a solid black binding for the whole quilt, but I couldn’t resist adding in some pieced binding and matching up with the piecing on the quilt top. I had a strip big enough from when I trimmed the quilt to be one edge of the binding though I had to adjust the width of each section since the quilt top had shrunk up a bit from the quilting. I had extra scrappy slab that I cut pieces from for the bottom edge of the binding. Lining everything up on the first pass of attaching the binding was a little tricky. I used pins at the seams so the binding would match up and worked backwards to the corners. I also opted to work with two pieces of binding that I would join on each of the two black sides. Finally, I had to decide what color to topstitch my machine binding. I really considered stitching black on black and orange on the scrappy sections, but decided in the end to use orange for the whole binding. This meant that the stitching would show up strongly on the black binding, but since I match my bobbin thread color to my top thread the orange thread on the bottom of the quilt would blend in more with the yellow orange and red I had used for quilting (and because most of the backing fabric is not black). Black stitching along the edge would have been more distracting on the quilt back. I used my basic machine binding technique. 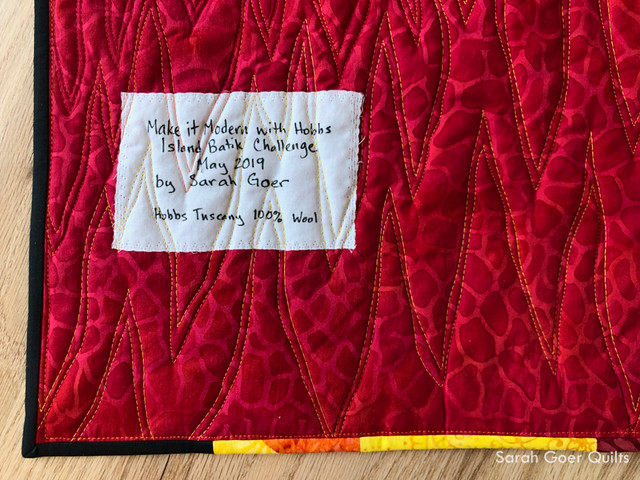 I've been kind of lazy about quilt labels lately, but used my preferred method of making a label and attaching the label to the quilt back prior to quilting. I use a micron pen to do my writing. I realize now I forgot the name of the quilt: On Fire. I'll have to add that. ;-) 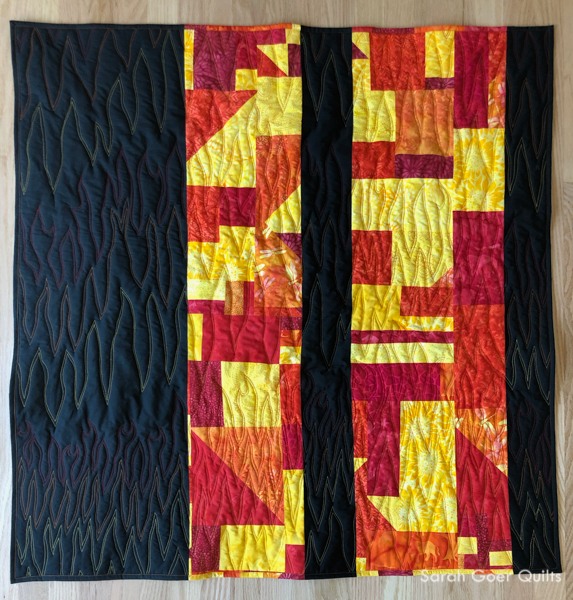 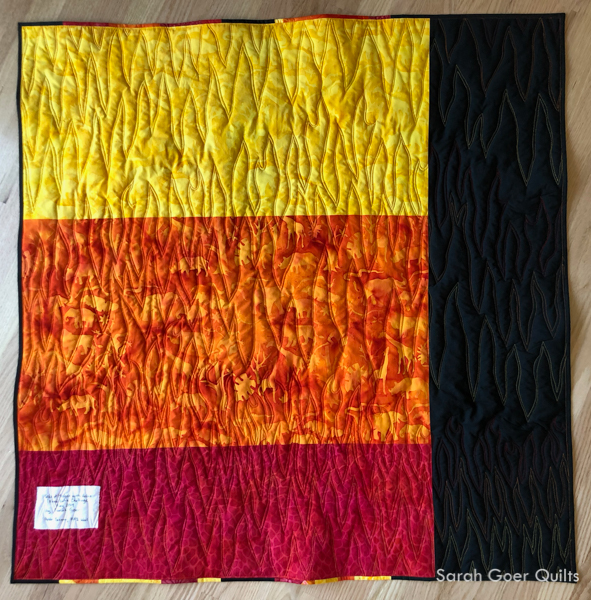 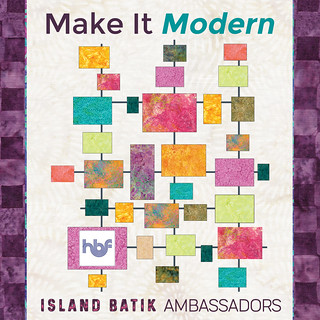 Thanks for visiting! Be sure to check out the Make it Modern projects from the other Island Batik Ambassadors.

I'm linking up to TGIFF, Needle and Thread Thursday, Put Your Foot Down, Beauties Pageant, and Favorite Finish.