You may remember the mini I sent away in December for the IG Mini Swap. At the beginning of this month my IG Mini Swap quilt arrived from Lisa in Pennsylvania. It is lovely! Lots of great blues and purples in this wonky log cabin quilt. And look at that cute sea star fabric in the middle! 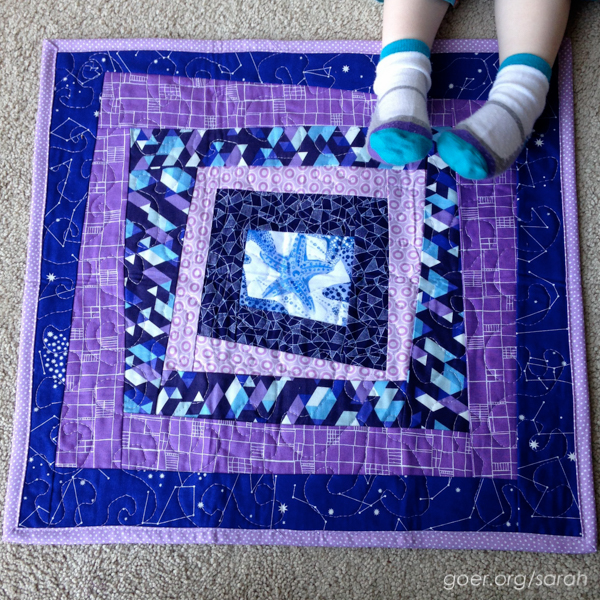 My 2 1/2-year-old was instantly attracted to everything in my package, asking me repeatedly to open the chocolate because "she likes chocolate and wants to eat chocolate." (Yeah, I'll be eating that when she's not around.) She's also pretty insistent that the zipper pouch is for her. She enjoyed putting all the goodies into and out of the pouch repeatedly. 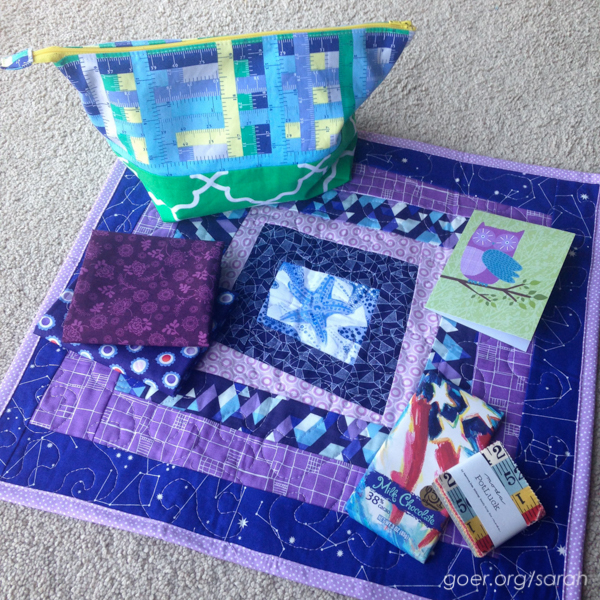 Thank you so much, Lisa! What a delightful package of goodies. I'm putting my first Instagram swap in the win column!

I knocked one of my three current quilting projects into the finish column last week. Here's the full report on Basic Shapes, my IG (instagram) Mini Swap quilt. It has made it's way to Becky, so I can finally tell you all about it. This project was a lot of firsts for me.

I loved watching the progress in the IG community. It was so inspiring (and at times intimidating) to see all the beautiful work being done by the hundreds of other quilters participating. I'm hooked, seriously. I've already signed up for three more IG swaps (the Schnitzel and Boo Mini Quilt Swap: round 3, as a late addition to be a swap angel in the Disney 2015 swap, and to the new rainbow mini swap).

A little on my process:

I had a hard time making a plan for my quilt and decided to start with doing something I had never done. I chose a blue fabric to make some flying geese. I also made some with orange. I made the flying geese using Rita Hutchens' Totally Tubular Strip Piecing after seeing her speak at a guild meeting. Halfway in, I decided to alternate the blue and orange geese. They aren't perfect, but I'm pretty happy with them. I'll definitely be doing more of Rita's magical tube piecing. I loved the geometry of the process.

I decided the flying geese would be a fun first border on a medallion style quilt, so I found a 9" star block to use in my center, pleased that the math worked out and I had 32 geese, with a total length of 36". I got stuck there for a while. There were 120 pieces in that 14" square. I kinda didn't know what to do next.

I decided to do the thin green border as a rest from the busy center. Then having used the green, I wanted to avoid it in the final border. I was worried that the last two borders were too simple, but I think with so much detail in the middle it worked out very nicely. In the end, the quilt finished at about 18" square. I'm looking forward to another medallion style quilt. Maybe by myself, or I'd love to do one round robin style with a group.

I had a great time quilting it. It's the most dense quilting I've done. I worked without marking my lines (cause I think I just don't have the patience for that) and I really felt like I was in control. It was the first time I've quilted with Aurifil thread and I am so pleased! It was so smooth and I had zero thread breaks while I worked. This is amazing compared to normal for me. I'm sold on Aurifil and just picked up some red thread for quilting the mystery quilt. (I see a collection of Aurifil in my future... I'm eyeing the Aurifil color card.)

I attach my binding by machine, and usually use a 2" width, but I've found that it's a little wider than I want it to be, and the stitching visible on the back is 1/8" from the edge of the binding. I tried the 1 3/4" width on this project and it was a little tight, some places the stitching on the back is on the edge of the binding, but I was overall pleased. I added corners at the top for hanging.

I haven't yet received my mini quilt from the swap, but there is so much amazing work being done by all the swappers. Check out #igminiswap on Instagram.

I'm linking up to Needle and Thread Thursday and to TGIFF at Quilt Matters this week (and looking forward to hosting it next week!) :-) Also linking up to Finish Along 2014 Wrap Up Party. Here's my full list of Q4 goals.

Do any of you have seemingly infinite quilt projects underway? So many WIPs you can't even make a list? An inability to not start new projects despite the fact that you have a million in progress? Yeah, that's me.

I also have a bunch of new fabric burning a hole in my pocket.

I've decided that I need to focus.

My attention span isn't good enough to just work on one project start to finish, so I'm allowing myself three. (We'll see how long this lasts, eh?) So here it is, my public declaration of the three quilting projects that I'll be working on.

#1 The Little Letters quilts. See, I'm already cheating... that's two quilts right there. But since I'm working on them assembly line style I'm counting them as one project. Weeks ago I pulled fabric for the next many letters. Last night I cut fabric for 16 blocks, G thought N in each color way, and I pieced most of them today. I'm stuck on N. It's hard. I'll be cutting those pieces again. :-/

#2 My IG Mini Swap quilt. Nothing like a deadline. I'm also super excited about this project that I designed as I went. I made some great progress on it this week to finish my ALYoF November goal of completing the top. I also created the label and prepped it for quilting. I got the recommendation for the Concepts iPad app ($7.99 for pro version) from Urban Quiltworks and installed it to try on some free motion designs before I get to work quilting it. I'm not ready to put the full view out there until my partner receives it, so here's a peek:

#3 The yet-to-be-named (yeah, I should get on that*) 2006 Mystery Quilt. It's pretty close to being a finished top. I'm excited about the fun backing fabric I have for it. I'm also excited about giving it as a gift to a friend, perhaps in time for Christmas. Guess I should get on that, huh? *That star block is apparently called Churn Dasher. That's kind of entertaining to me, since my first mystery quilt used the Churn Dash block.

I'm already really wanting to work on other stuff, and not letting myself... that's making finishing one of those three an even more exciting goal... cause then I can replace it with a WIP or new project that's tempting me right now.

What are your best tips for keeping yourself focused on one project or a short list of projects?